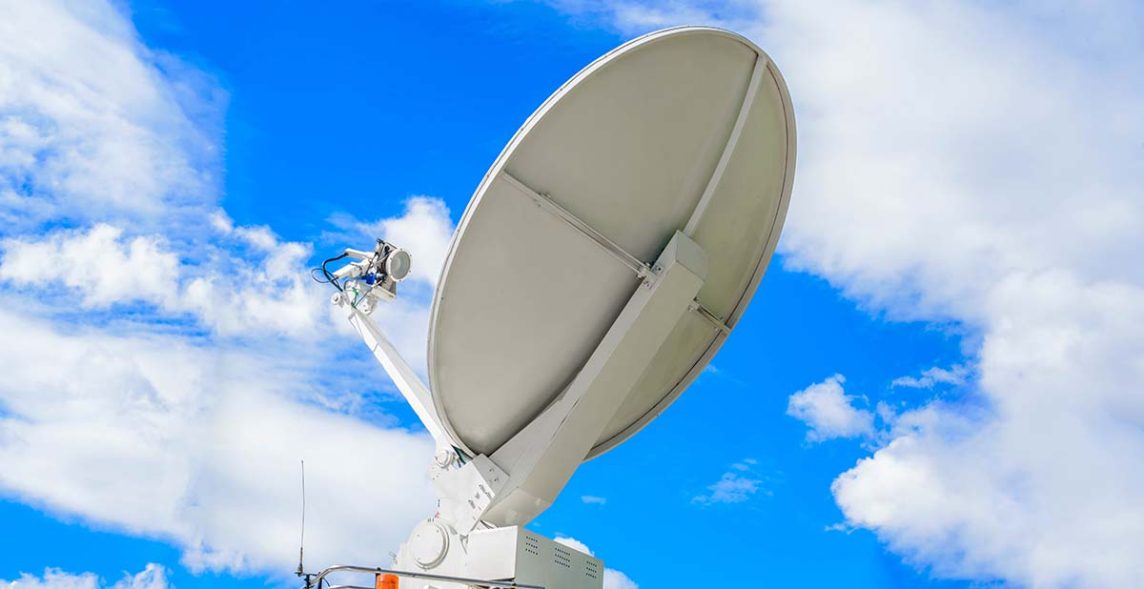 With the rise of Over The Top Content (OTT) delivery and an ever-more competitive landscape, satellite news gathering broadcasters are under increasing pressure to deliver the targeted content at the correct time to the right platforms.

Consumers expectations in terms of content, choice, and quality have drastically increased over recent years with the advent of new technology — they also expect the news and latest, unfolding sporting action to be delivered directly to them, wherever they may be located.

This places extra pressure on Satellite News Gathering (SNG) operators to capture live content from across the globe, from anywhere in the world, is not an insignificant achievement.

The recent Brexit vote in the UK is a prime example of broadcasting stretched to the limits. Over a matter of days, the UK political scene was awash with breaking news and unexpected twists and turns. More than that, the Brexit vote and everything that followed (and is continuing to follow) has massive implications for the rest of the European Union and, indeed, many other countries across the globe. For news teams, this has meant a constant rush to ensure they are at the correct place at the right time to capture the latest developments in order to broadcast live and, in many cases, to multiple countries and regions across the world.

Not only were viewers demanding “instant” news, they also wanted the highest quality viewing resolution possible. This is also true for other live events, such as major sporting events, where viewers want to watch the action unfold, not hear from another source who won a race before watching that event.

The Challenge Of Satellite News Gathering

This is especially true as the SNG teams are often not specifically trained in satellite technology, despite being required to handle and manage specialist equipment. A lack of space also means that the monitoring of those signals is generally left to the team at the broadcast headquarters location. This means the SNG team is often in the dark, not knowing until too late whether the signal has arrived in good quality.

That lack of training incurs errors all to easily. Satellite works well but simple mistakes can have drastic consequences. If the antenna is mis-pointed for example, the broadcaster can suffer a serious impact in service quality as well as potentially causing satellite interference for other users.

Equally, satellite broadcasters can be victim to other factors beyond their control—for example, severe weather, such as extremely heavy rain, can cause rain degradation. When there is a degradation of any description, contacting the appropriate specialists to fix the problem at the satellite operator Network Operations Centre (NOC) can be problematic.

This is especially true in the case of a major breaking news or sporting event where many broadcasters may be experiencing the identical problem, especially if such is weather related, and therefore causing a bit of a bottle neck in “fix” requests that must be dealt with by the satellite operators. For many broadcasters, there may also be language barriers present when the satellite operator must be contacted directly to resolve issues—this makes resolution that much harder to correct.

Prevention is the key in the satellite world to ensure the best performance and quality of any broadcast experience. As often stated by the Satellite Interference Reduction Group (iRG), one of the most effective ways to reduce errors is through better, more intelligent tools. If broadcasters have more tools in the toolbox and are able to automate more processes, the risk of human error is vastly reduced, which is by far and away the most common cause of degradation.

Through the addition of tools that alert users as soon as there is a problem, or how to take measures to automatically resolve issues with the signal, the result will be a much smoother process with a greatly reduced risk of signal loss. This is particularly significant for those events outside beyond local control. By adding in tools and processes to battle such happenings, the broadcaster can take possession of some of that control once again.

Ultimately the team in the OB truck needs as much information and support as possible to enable them to ensure that any signal leaving the site is of the best possible quality—the last element needed is further complication.

The particular and unique challenges for SNG led Integrasys to develop a special tool to assist satellite broadcasters in this environment. Satmotion SNG enables the SNG operators to regain some of that control and also simplifies the setup process for them. The antenna can be either manually or automatically aligned and the tool makes it possible for them to check the alignment is correct, whichever method is used.

Satmotion SNG also takes measurements of cross polar isolation, as well as giving the SNG operators access to measurements from the NOC. This means that the team has the appropriate tools at hand to spot if there are any problems that are likely to affect the signal.

Satmotion SNG is simple to use. As mentioned above, SNG truck operators are often not satellite specialists, nor do they have the time to deal with complicated procedures and data. Therefore, Satmotion SNG is a simple app that can be downloaded on a laptop, tablet, iPhone, or google glass. The product has a simple, easy-to-use interface and displays the required information in such a way that little training is required for use of this technology.

This year’s Tour de France was hit with some pretty horrendous weather. At the time of this writing, stage 12 was reached—this cut the race to 6 km due to high winds. Heavy rain also plagued the event—this meant a lot of soggy cyclists as well as a number of challenges broadcasters attempting to capture live event coverage.

Not surprisingly, the severe rainfall led to a certain amount of rain degradation for a number of satellite broadcasters. This meant loss of transmission and some pretty frustrated teams working hard to get their feeds back on air. Some of the broadcasters were using Satmotion SNG and that meant they were able to meet the QoS and even repoint during transmission if that was needed to keep the link up throughout the coverage with minimal effects on the actual broadcast.

Satellite Back On Top

Satellite can sometimes receive bad press. Most consumers consider satellite the poor relation for broadband provision and many also have an identical view in regard to broadcast, as well.

However, with more and more tools being made available to enable users and operators to overcome some of the more interruptive challenges, that percept can be countered with seamless, good quality coverage—wherever and whenever. 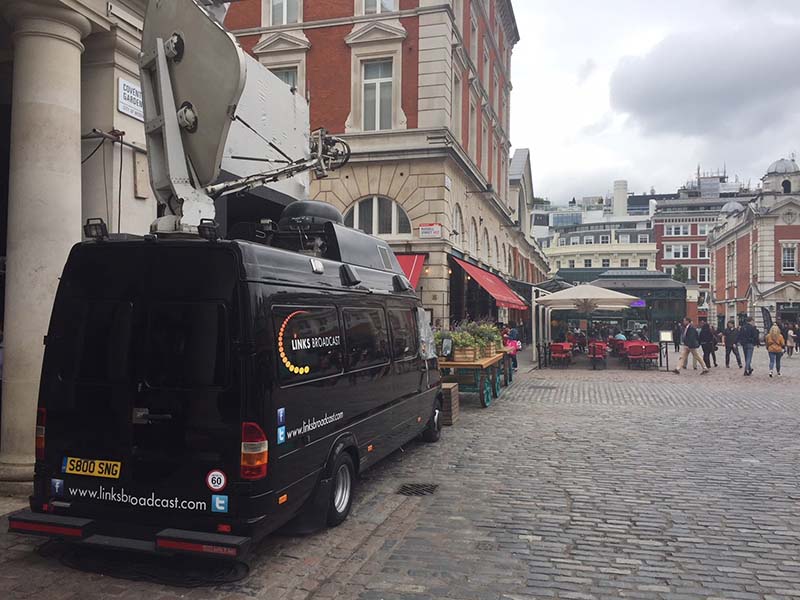 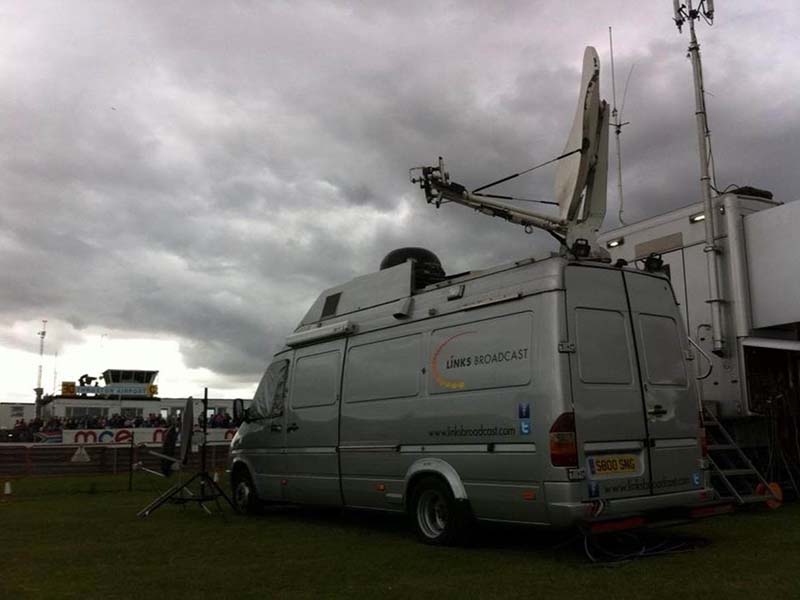 The original version of this article was published in www.integrasys-space.com by Juan Martinez.