The Royal Wedding Outside Broadcast

OUR PART IN THE ROYAL WEDDING OUTSIDE BROADCAST

The Requirement
We here at Links Broadcast were all very excited to be asked by our client Arqiva to supply our outside broadcast trucks to Fox News, Mediaset and HBO.
We also provided a KA flyaway dish for Prolink TV. A four camera event with crews for an Australian breakfast news programme was also deployed along with our production truck for our client AT1 Media.
As with any event the pre-planning was meticulous but for the event of the year it was even more so than usual!
Following an exchange of a few hundred emails, many internal meetings and various conference calls across the globe later, we were ready to roll.
Arrival at Windsor Castle
Our engineer, Mark Coulthurst set off in S700 SNG to drive to Windsor plus our Gary Peacock with our KA Flyaway kit and S300 SNG was heading for Tower Bridge for HBO. We even had a ready to go standby truck for Mediaset (Italy) as a just in case scenario if their kit failed!
We arrived bright and early on site amongst the mist at The Long Walk on the 16th May 3 days ahead of the event. With glorious sunshine forecast it looked to be a fabulous and momentous few days. 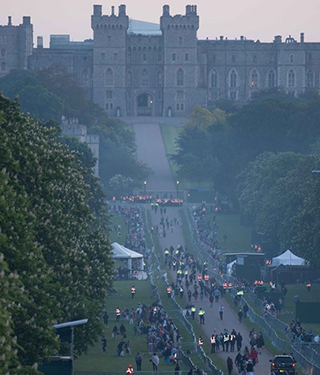 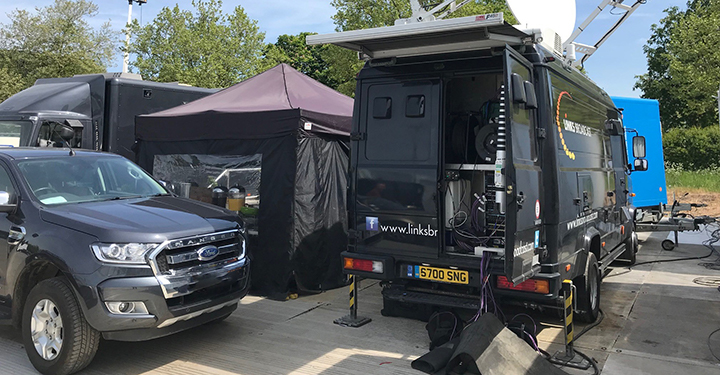 S700 SNG our HD OB truck was set up along with the ever jolly Fox News crew that had travelled to join us from the USA.
A three camera live location was installed with cables running back to our truck ready for the live broadcasts.
The day consisted of testing the 3 camera mux for the remote production from The Long Walk OB compound for Fox News. Each camera was separately encoded and sent as a mux back to the studio in America.
The KA dish located on our truck provided 70 hours of continuous bandwidth for Fox’s Dejoro back packs to stream live to the affiliate Fox stations across the USA.
Our man Gary was located next to S700 SNG working for our client Pro Link providing a KA Flyaway for internet access and dedicated bandwidth for LiveU use.
It wasn’t long before the crews mind turned to food!! They made their way to the ‘exclusive’ crew food trucks and stocked up on plenty of yummy stuff to keep them going. 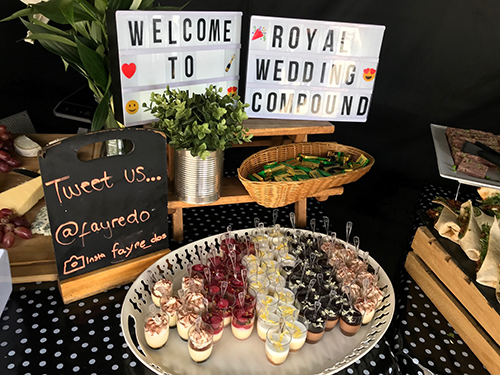 Beautifully presented food and that was just for the crew! 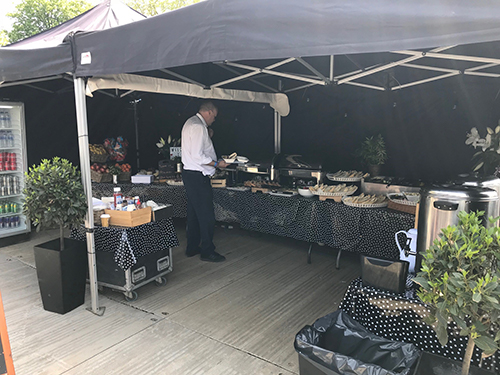 Madness ensued while hundreds of different crews got busy from OB truck operators like us to TV presenters, news agencies, caterers and security all preparing for the biggest calendar event of the year which was to be viewed all over the world.
From day one’s early morning arrival our day crews continuously swapped with the night crews, continuing the rigorous 24 hour operation ensuring that all services were stable and clean to air right through to the close of the event on Sunday 20th for the post wedding interviews and live content.
City Hall/Tower Bridge Location
Our man Rob was in our truck S300 SNG from the day before the wedding to uplink the HBO temporary studio output back to the USA from City Hall with the iconic backdrop of Tower Bridge in view.

Our OB Truck outside City Hall

Tower Bridge peeking over the top of the HBO compound

Let’s not forget our Pre Wedding Build Up job for AT1 Media.
This was a four camera event in different London locations each day of the event. Our production truck S100 SNG was deployed including all cameras, comms and sound facilities at each of the four locations.
The challenge here was to coincide with the time difference between the UK and Australia meaning that the crews were having to double crew for set up and live transmission making a huge logistical challenge and some very tired guys!
All four locations day and night went swimmingly with lots of Australians watching early morning Royal Wedding fever courtesy of Links Broadcast.

Harte & Garter Hotel, Windsor Location
Four camera ops and two full ENG camera kits were provided for BBA TV and Eurovision who had an amazing prime location from the balcony of the Harte & Garter which overlooked the Castle grounds. The Royal Wedding Outside Broadcast event was a 3 day operation. 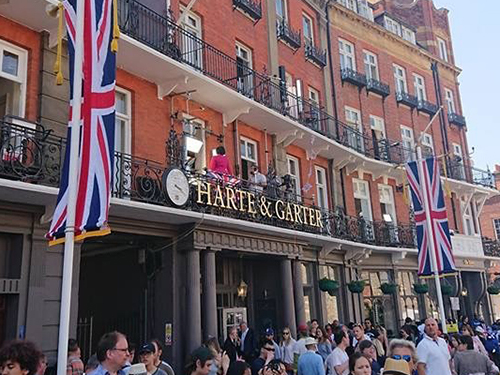 The Harte & Garter directly opposite the Castle 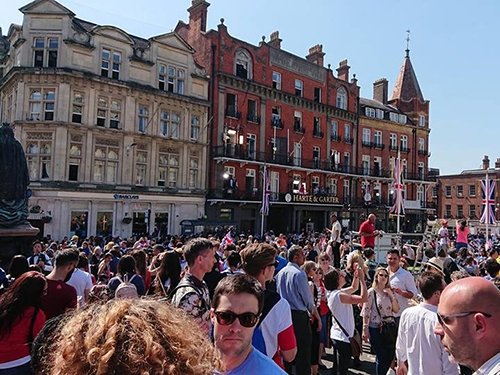 What a choice of location – the balcony of the Harte & Garter

Panoramic view from the balcony of the Harte & Garter, the crowds are gathering and it’s not even the wedding day yet!

The Wedding Day!
As time ticked by and tons more double checks and tests than we care to remember it was time for the big moment the world was waiting for!!
With full coverage of the Royal Wedding being beamed across the pond to the United States in its full glory we could finally take a relived breathe and enjoy the wedding – all while keeping a close eye on the transmission of course!!
After a touch of celebrity spotting which was fabulous we were ready to catch a glimpse of Prince Harry & Meghan.
Not all of the Links crews were involved in the Royal Wedding – we also had Andy covering the FA Cup Final at Wembley for East Productions (maybe more important for a very small number of the world population) and Dave who was in Hull covering the ALLAM British Squash Open in Hull (we are sure he managed to watch the wedding too somehow!)
The whole day and well into the evening went without a hitch and we were immensely proud to have been part of a royal historic occasion. 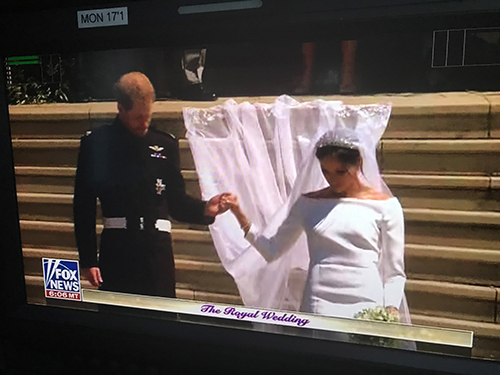 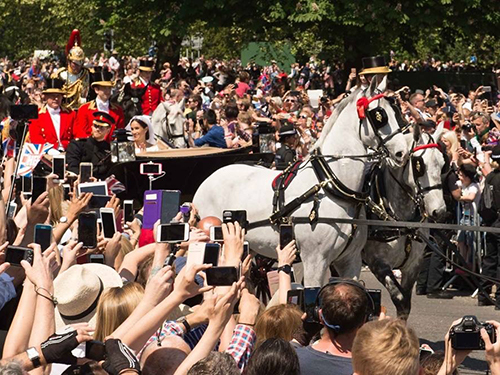 Thanks from our clients

We survived the Royal Wedding….Thank you all for your hard work and dedication to our services.

Just wanted to let you know that Gary did a great job for us over the past few days up at Long Walk.

Please pass on our thanks for helping us to make a client very happy.

Just called you to thank you personally and send my best to the crew who has been wonderful in this hard process.

I really appreciate all the help and can’t really imagine what I would do without you!